zoom me up dubai october

The Asian Infrastructure Investment Bank (AIIB) and the International Renewable Energy Agency (IRENA) have signed a Memorandum of Understanding (MOU) committing to work together to support energy transition and promote renewable energy.

The MOU was signed on Sep. 20 by AIIB President, Jin Liqun, and IRENA Director-General, Francesco La Camera, at a virtual ceremony to mark the new partnership. President Jin remarked upon how AIIB and IRENA will work together to accelerate investment and enhance awareness of renewable energy solutions, particularly in Asia.

“With Asia’s growing energy demand, and the rising challenges from climate change, we need to ensure the region invests more than ever in renewable energy and energy efficiency to facilitate its transition to a low carbon energy mix. This partnership is part of the Bank’s journey toward realizing the goals set out in the Paris Agreement,” said President Jin.

Under the terms of the MOU, both AIIB and IRENA jointly decide to scale-up their efforts to unlock capital and accelerate the uptake of renewable energy by their members. Mr. La Camera highlighted that this Memorandum bolsters IRENA’s efforts to facilitate the flow of low-carbon capital into the energy transition where it is needed most, including through the Climate Investment Platform, a multi-stakeholder initiative designed to mobilise climate capital, of which IRENA is a founding member.

“The energy transition is the centrepiece of global efforts to achieve sustainable development, address climate change and accelerate a new age of inclusive, low-carbon growth,” said IRENA Director-General Francesco La Camera. “Through partnerships like this, we can catalyse the flow of capital towards renewables and energy transition related infrastructure in order to build a more resilient and sustainable energy system that delivers significant socioeconomic benefits to people and achieves global climate objectives.”

Today, Asia is home to about 60 percent of the world’s population and contributes to almost 50 percent of global energy-related greenhouse gas emissions. The region accounts for nearly half of global renewable-energy capacity, according to IRENA, up from less than one-third a decade ago. However, relative to its size, Asia still lags behind, with renewables accounting for less than 15 percent of total primary energy consumption in 2020.

Furthermore, developing countries in Asia are expected to account for about two-thirds of global energy growth by 2040. With its vast wealth of affordable and sustainable energy resources, such as hydropower, wind and solar, it is essential that this growth is met by renewable energy capacity.

Under its Corporate Strategy, AIIB aims at reaching or surpassing by 2025 a 50 percent share of climate finance in its actual financing approvals, reflecting its commitment to support the Paris Agreement. Its Sustainable Energy for Asia Strategy (2017) also sets out a clear framework for how the Bank will invest in energy projects that increase access to clean, safe, affordable and reliable energy for millions of people across Asia.

IRENA has been instrumental in mobilizing finance for renewable energy deployment. Through its partnership with the Abu Dhabi Fund for Development (ADFD), under the IRENA/ADFD Project Facility, it has supported transformative renewable energy projects in developing countries across Africa, Asia, Latin America, the Caribbean and the Pacific. Under the Facility, USD 350 million in concessional loans was committed over seven annual funding cycles, assisting 32 projects in 26 countries.

The Climate Investment Platform (CIP) was launched at the United Nations Secretary General’s Climate Action Summit in 2019, as an inclusive partnership to scale-up climate action and translate ambitious national climate targets into concrete investments on the ground. The founding partners include IRENA, SEforALL and the United Nations Development Programme in coordination with the Green Climate Fund.

Posted by chris macrae at 8:57 AM No comments:

After more than five years leading the Strategy, Policy and Budget Department, von Amsberg will step down as Vice President to be closer to his family. He will transition to become Special Advisor to President Jin.

Von Amsberg led AIIB in the development of its first Corporate Strategy and the crafting of all of the Bank’s sector strategies. He shepherded the Bank through the COVID-19 pandemic, launching a Crisis Recovery Facility that has supported many of AIIB’s members. Under his leadership, a revised Environmental and Social Framework was approved, as was the negotiation of AIIB’s participation in international partnerships, including the Global Infrastructure Facility and the Multilateral Cooperation Center for Development Finance.

“The impact Joachim has had on our Bank cannot be overstated, particularly his role in guiding AIIB’s first Corporate Strategy into existence,” said President Jin. “He brought to AIIB deep expertise of how multilateral development banks operate, which was critical in our startup years. We will think of him for years to come when we talk about the origins of our mission to invest in the Infrastructure for Tomorrow.”

As approved by AIIB’s Board of Directors, Sir Danny Alexander, Vice President and Corporate Secretary, will take over as Vice President for Policy and Strategy, reporting to President Jin.

As a member of the Senior Management Team since 2016, Alexander has played a pivotal role in establishing AIIB’s governance structure and shareholder relations program, including leading the negotiations on the Accountability Framework. AIIB’s membership has grown from 57 founding members to 103 approved members under his tenure.

“AIIB is poised to help our members battle the dual emergencies of climate change and the pandemic and Danny has demonstrated a keen understanding of the impact AIIB can play in this transition. He is also an excellent negotiator and leader who will bring passion to his new role,” said President Jin. “I believe Danny will help strengthen our ability to serve our clients and I want to congratulate him on this new opportunity.”

Ludger Schuknecht to be appointed as Vice President and Corporate Secretary

Schuknecht has been appointed by AIIB’s Board of Directors to the position of Vice President and Corporate Secretary, reporting to President Jin. He will also become a member of the Bank’s Senior Management Team.

Schuknecht has held important leadership posts at the national and international levels. Most recently, he was a Visiting Professor at the Lee Kuan Yew School of Public Policy. Prior to this role he was Deputy Secretary-General at the Organization for Economic Co-operation and Development and was previously Chief Economist and Director General of Germany’s Federal Finance Ministry. He has extensive experience working with international financial institutions, including the IMF and World Bank, and acted as the Chief Negotiator for Germany in the founding of AIIB. In addition, Schuknecht was Co-chair of the Infrastructure Investment Working Group of the G20, which gives him deep understanding of the sector and its needs.

“As one of the architects of the founding of AIIB and the drafting of its Articles of Agreement, Ludger is uniquely qualified to take on a leadership position responsible for the Bank’s governance and member relations,” said President Jin. “He is also a thought leader in the areas of international finance and fiscal policy, which are skills that will help AIIB as it moves from startup to growth phase. I look forward to hearing his perspectives and ideas as a member of my Senior Management Team.” 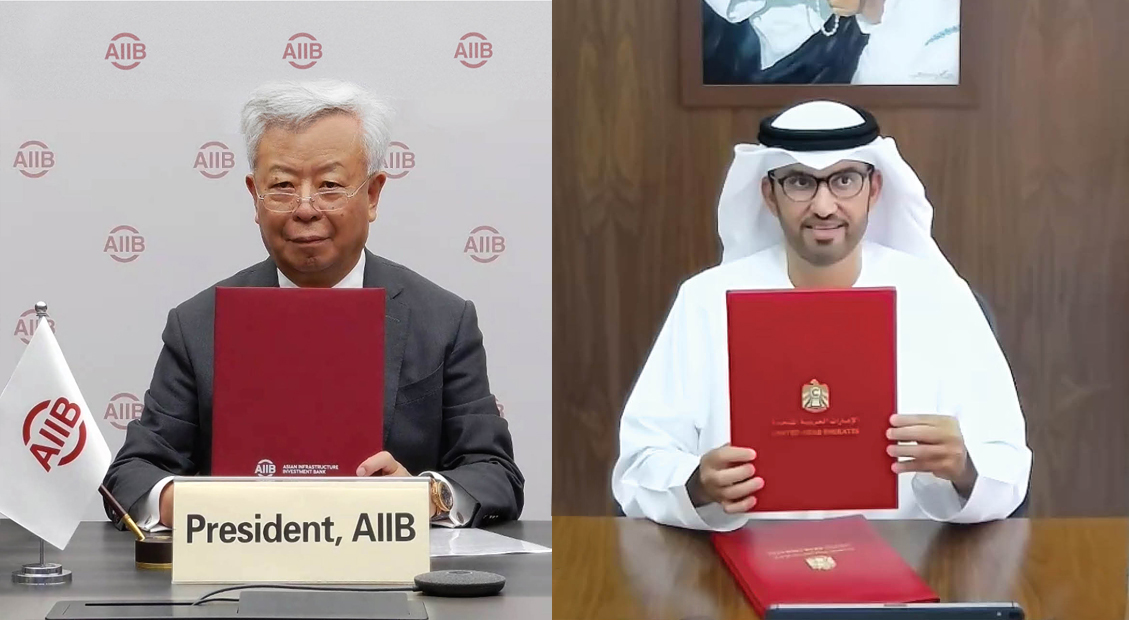 Mr. Jin Liqun, AIIB President and Chair of the Board of Directors and H.E. Dr. Sultan Al Jaber, the UAE’s Minister of Industry and Advanced Technology and Chair of the AIIB Board of Governors, signed the MOU confirming that the UAE will host and chair the 2021 AIIB Annual Meeting virtually on Oct. 26-28.
DOWNLOAD PICTURE

The United Arab Emirates (UAE) will host the Sixth Annual Meeting of the Board of Governors of the Asian Infrastructure Investment Bank (AIIB) with the theme “Investing Today, Transforming Tomorrow” virtually on Oct. 26-28, 2021.

A Memorandum of Understanding (MOU) confirming that the UAE will host and chair the Annual Meeting virtually was signed on July 13, 2021 by AIIB President and Chair of the Board of Directors Jin Liqun and His Excellency Dr. Sultan Al Jaber, the UAE’s Minister of Industry and Advanced Technology and Chair of the AIIB Board of Governors.

The virtual MOU signing was witnessed by H.E. Dr. Ali Obaid Al Dhaheri, Ambassador of the UAE to the People’s Republic of China, at the AIIB headquarters in Beijing.

“As one of the founding Members of AIIB, the UAE has provided staunch support for the Bank since its foundation and played a crucial role in shaping AIIB as it has grown and developed,” said President Jin. “We are committed to continuous collaboration with the Government of the UAE to deliver a highly productive and effective Annual Meeting in a virtual format.”

H.E. Dr. Sultan Al Jaber said, “The Annual Meeting of AIIB’s Board of Governors provides a great opportunity to foster collaboration, forge new partnerships among the international development community and affect positive change. Overcoming our global social and economic development challenges requires a cohesive community of like-minded thinkers and doers acting in the best interests of all. As the host of this year’s meeting, the UAE is committed to chairing a highly engaging and inclusive Sixth Annual Meeting to enable all participants to realize the best possible outcomes.”

To foster wider engagement with the Middle East, a series of virtual lead-up events targeting specific Members’ business communities will be organized in the months preceding the Annual Meeting. The first lead-up event will take place on July 28, 2021. The event will introduce the AIIB Corporate Strategy to audiences in the UAE and identify potential areas for collaboration.

The Asian Infrastructure Investment Bank (AIIB) is a multilateral development bank whose mission is financing the Infrastructure for Tomorrow—infrastructure with sustainability at its core. We began operations in Beijing in January 2016 and have since grown to 103 approved members worldwide. We are capitalized at USD100 billion and Triple-A-rated by the major international credit rating agencies. Working with partners, AIIB meets clients’ needs by unlocking new capital and investing in infrastructure that is green, technology-enabled and promotes regional connectivity.

Our logo is available in JPEG and PDF format.

SEND AN EMAIL
VIEW MORE NEWS
SUBSCRIBE TO OUR RSS

The Asian Infrastructure Investment Bank’s (AIIB) Board of Directors has approved a USD250-million investment in Jordan to ...

The Asian Infrastructure Investment Bank (AIIB) has become the first implementing partner of the Multilateral Cooperation ...

Posted by chris macrae at 4:14 AM No comments: 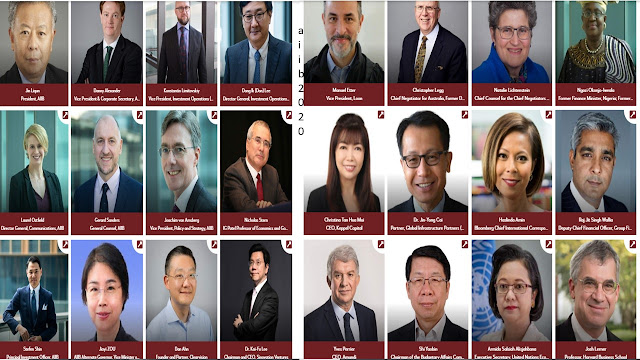